EMERGENCY ALERT ALERT: Last day of operation for Mary Moss spraypad is Sunday 9/26! Read On... Do you have flood damage from Hurricane Ida? Read On...

This 2-part twin house faces east onto Witherspoon Street. It is comprised of a 2-story, 4-bay core with an end-gabled roof and a 2- story rear addition. Key features of the house include its chimneys, windows, and front porch. The building has asphalt shingles on its roof and wood eaves. The core has a small brick chimney centered on the ridge. Its walls are frame, clad with wood siding. Windows are 2x2 double hung sash units that appear to be historic, with wide surrounds. They are arranged mostly symmetrically. On the main (east) elevation, the second floor has two windows - one for each interior unit. The first floor has paneled doors in the center bays (both replacement), with windows in the outer bays. A full-length front porch has a hipped roof supported by three columns with a railing that flows down a set of frame steps to the sidewalk. The end walls of the core have a single rank of windows, including small 1x1 attic windows. The core has a stone foundation.

The addition is a 2-story section extending along the entire west elevation of the core. It has a gabled roof with a small brick chimney at the west end of the ridge. The walls are frame, clad with wood siding. Windows are 2x2 double hung sash units, with two bays on the elevation facing Quarry Street. The section has a stone foundation.

This 2-story, 4-bay house is a residential twin located immediately north of the house at 136 Witherspoon. It consists of the 2-story core along the road and a 2-story rear addition. Key features of the building include its windows, chimney, and porch. The core has an end- gabled roof clad with asphalt shingles. A brick chimney is centered on the ridge, and the eaves are wood. The frame walls of the house are clad with vinyl siding. Windows are a mixture of replacement 1x1 and also 2x2 windows that appear to be historic; they are mostly aligned symmetrically. The main (east) elevation has three windows on the second floor (two for the south unit, one for the north unit). The first floor has doors in the center bays (historic paneled units with nine inset lights above the lock rail), with windows in the outer bays. A full-length front porch has a hipped roof and is supported by turned columns with minimal braces. The railing connecting the columns flows down the wide, frame, center stairs down to the sidewalk. The house has a stone foundation.

The rear addition is a 2-story section that extends along the entire rear (west) elevation of the core. It has a gabled roof (cross-gabled to the core). The walls are clad with vinyl siding. The north and south side walls feature an irregular window spacing; windows are 1x1 replacement units.

The house at 7 Quarry Street is located on the west end of the property. It is the most altered building on the property. The core is a front-end-gabled building facing south onto Quarry Street. Its roof is clad with asphalt shingles, with vinyl clad eaves. The frame walls are clad with vinyl siding, although the wall surface below the front porch is clad with a faux stone veneer. Windows ar replacement 1x1 units, many with inoperable 2-paneled shutters. Windows are not aligned vertically except on the east elevation. The main entrance is located near the southwest corner. The front porch extends along the entire south elevation; it has a hipped roof clad with asphalt shingles that is supported by iron posts connected with an iron railing. The house has a stucco-clad foundation. On the rear (north) elevation is a 1- story porch with a shed roof and vinyl cladding.

Soon after the Ferguson Tract was partitioned, a house was constructed on this parcel. The house that appears on the 1852 atlas appears to be the house at 142 Witherspoon Street. Near the end of the century, with increasing residential pressure in the Witherspoon-Jackson community, another house was constructed along Witherspoon Street (likely 136 Witherspoon Street), and two houses were constructed on the lot along Quarry Street (7 Quarry and the now-demolished 5 Quarry). The Sanborn Atlas of 1895 shows the parcel with these four houses. The house at 5 Quarry was demolished by 1940, as it does not appear on the historic aerial of that year or any subsequent historic aerials. 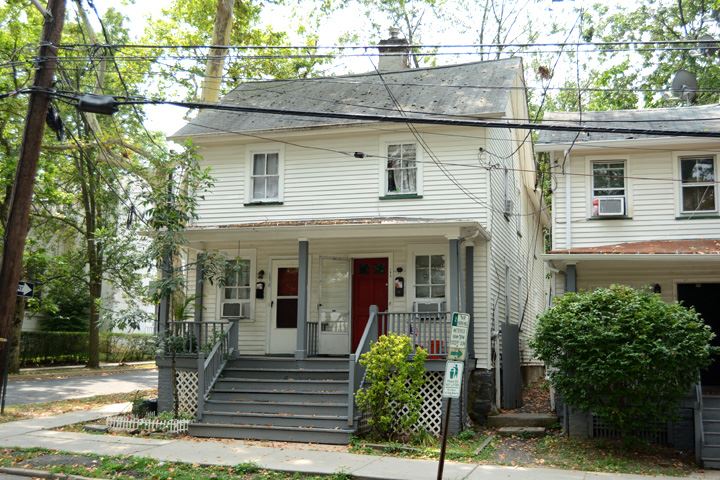 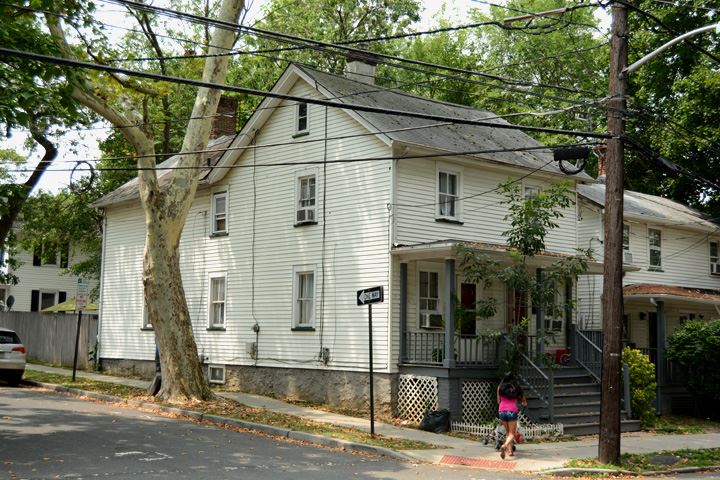 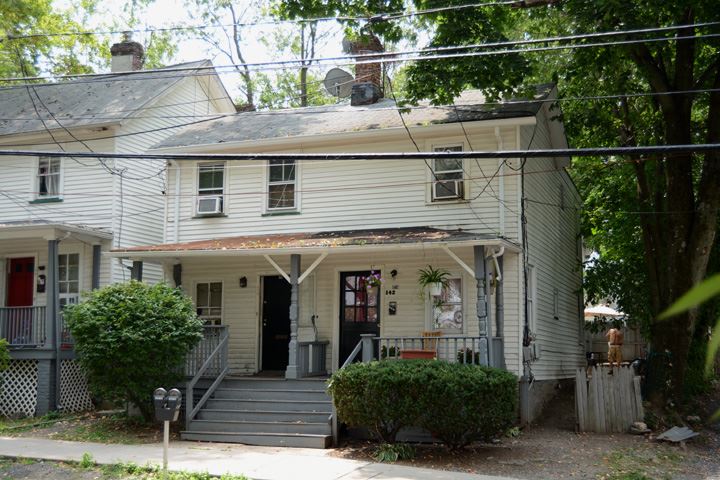 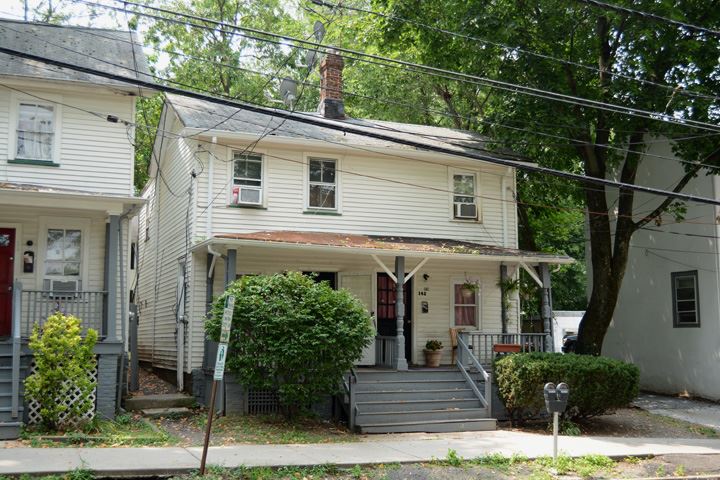 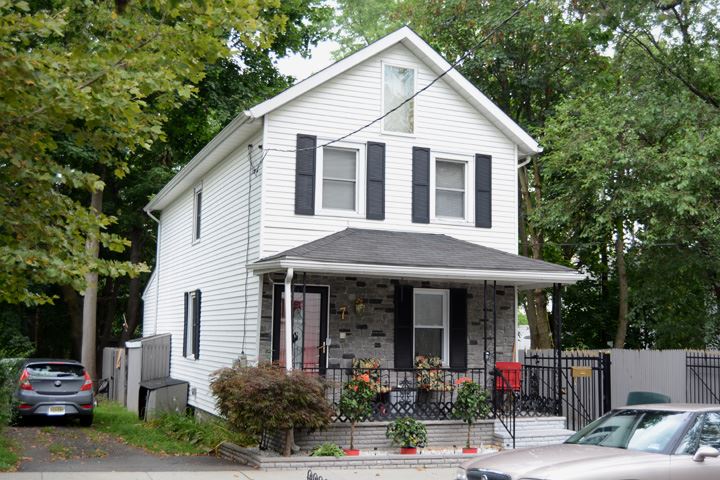 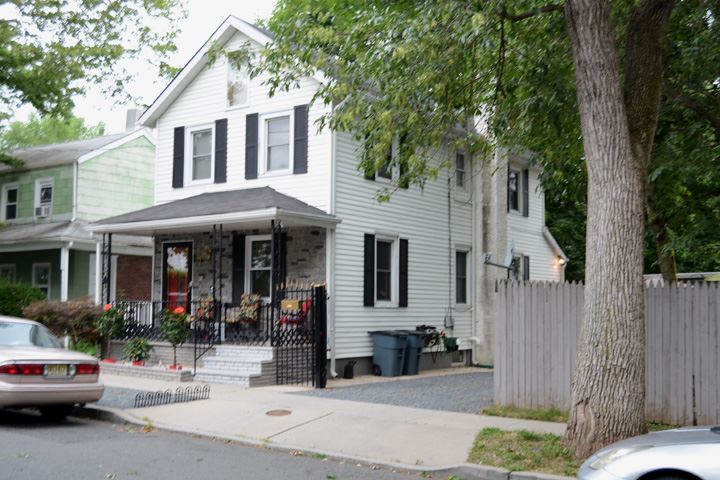