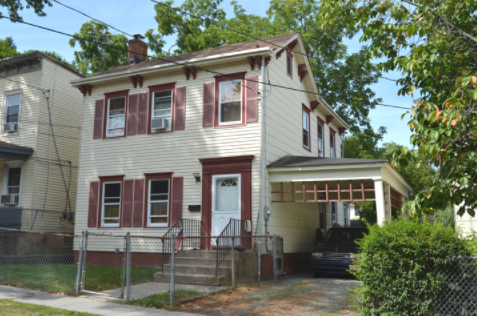 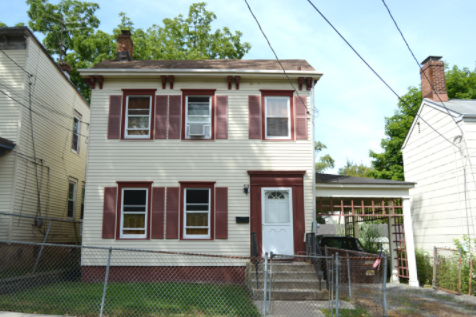 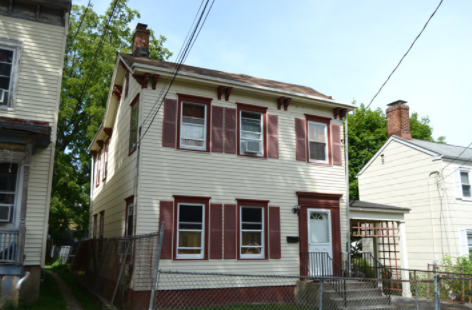 The house on the property is a 2-story building with Italianate details. The core faces east onto John Street and features a 2-story rear addition. Key features of the house include its wood cladding, small chimney, brackets, and window/door surrounds. The core has an end-gabled roof clad with asphalt shingles with a small brick chimney near the south end of the ridge. The eaves are wood and incorporate an interior gutter system. The brackets are scroll-type consoles installed in pairs below the eaves. The frame building is clad with wood siding on the main (east) elevation and machined shingles on the north and south end walls. Fenestration is mostly replacement 1x1 double-hung sash units, arranged mostly symmetrically. Windows on the east and south elevations feature a lip lintel typical of the Italianate style; those on the east elevation also feature inoperable louvered shutters. The door is located in the north bay of the first floor. The door itself is a replacement unit, but its thick molded surround appears original to the house. The machine shingle-clad end walls feature louvered attic windows centered below the peak of the gable. The north end of the house is the location of the porte-cochere, a hipped roof element that provides an attached carport; the north end wall of the core does not have a door connecting to the porte-cochere. The south end features a single rank of windows near the southeast corner. The core has a stucco over a stone foundation.

The rear addition is a full-length section. It has a similar cornice to the core, including the paired brackets. Windows are 1x1 replacement units, arranged symmetrically on the machine shingled walls.

The house was constructed c. 1880. Historic maps as late as the map of 1875 show a vacant lot in this location. The house first appears on the map of 1890 and appears on all subsequent historic aerials.