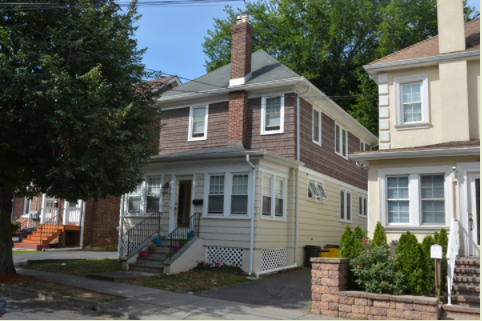 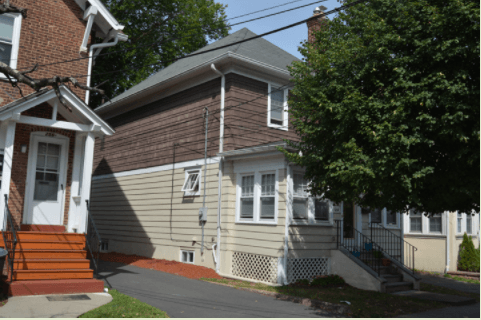 This is a better-preserved version of the unusual variation on the American foursquare than its mirror image northern neighbor #260. The two-story rectangular block with the narrow dimension facing the street is topped with a hipped roof on a broad overhang. The second-floor facade is asymmetrical with the right window closer to the edge than the left, and the facade split by a projecting brick chimney biased to the right from the center. The hip-roofed fully enclosed front porch has a pair of windows to either side of the centered front door at the top of a flight of stairs with metal railings. The second floor is alternating narrow and wide courses of shingles over uniform coursing of wide machine shingles. The typical windows are six over one double-hung units. The north facade has siding and symmetrical window arrangements at each floor level. The center pair on the second floor has a single to either side while the first-floor center pair has small paired units to either side. The south side has a single unit towards the front on each floor level.

The house was constructed c. 1925. Historic maps show a vacant lot in this location as late as the Sanborn atlas of 1918. The Franklin Survey Atlas of 1930 shows the house, as do the subsequent historic aerials.